The holiday giving season is here. While financial gifts are vital to Common Heart's operation, that's not the only way you can help. We always need volunteers and as Ron Spang will tell you, any age is the right age to give back.
Describing himself as “ part of the over hill gang,” Ron Spang says he volunteers at Common Heart because he can.
Ron, who lives in Indian Trail, retired from the City of Charlotte where he worked with the Department of Transportation's computer systems.
Now you'll find him three days a week giving his time at Common Heart. On Wednesdays he mans the vacuum and helps with “janitorial duties.” Thursdays he sorts and stocks food in the Common Cupboard and he's a regular Saturday morning volunteer helping to get food ready for volunteer drivers to deliver to local residents in need.
Ron has been an asset at Common Heart for about four years.
“God has given me health. (Volunteering) … this is what you have to do,” he said. “I always felt guilty … that I didn't do this way back when and I just feel so humble because that could be me looking for food. You just take your life for granted and I'm just very grateful to do it.”
There's always room for more volunteers at Common Heart. If you can help, visit http://Volunteer.TheCommonplace.org

Posted by Common Heart at 4:34 PM No comments:

Many of our long-term volunteers got their first experience with Common Heart during our Great Turkey Countdown. That's where Colin Albert's story started.
Here's a peek at his story from our Common Good newspaper ... what's your Common Heart story? 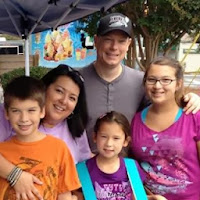 Volunteer Colin Albert has seen “life go through a lot of ups and downs” during the past five years he's delivered food to Common Heart's neighbors in need.
The Waxhaw resident has delivered meals to a family who later suffered a fatal fire and a woman who had a severe heart attack. Among his current six families on his delivery route is a woman whose arms bear the scars of years of drug use and cutting.
“She is fighting to bring her life back from where it was,” Colin said. “A lot of us are just one mishap or one life choice away from that. What I think we're doing is coming alongside people and saying 'It doesn't matter where you've been. Let's focus on where you're going.'”
It's important that those served by Common Heart understand just how important they are – by their neighbors and by God, Albert said.
“It really comes down to I care so much about those people … I realize that my involvement in their lives can do a lot to show them that they're worth caring about,” he said. “A lot of the people in our world that are down and out are down and out partially because they think they're not worth caring about. But going to and delivering (food) to people that may not have a car or whatever and asking them about their life you can actually do a lot to show them … that they're loved. Through what we do, we tell people 'We care about you unconditionally and God cares about you in that way, too.'”
Posted by Common Heart at 1:53 PM No comments: